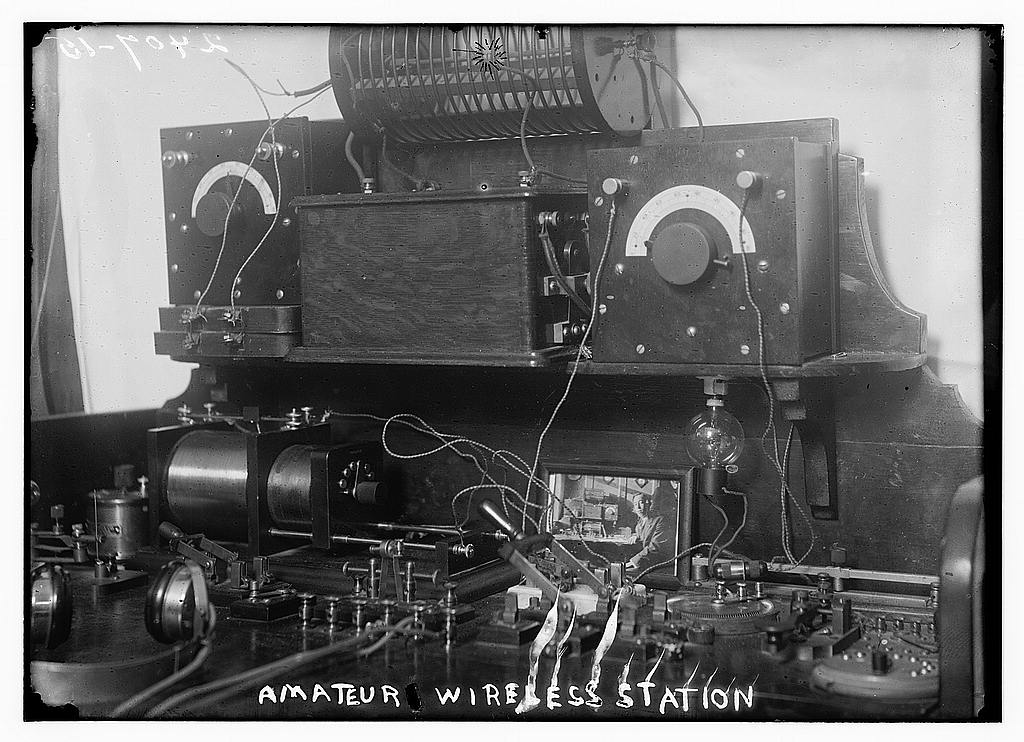 In reference to the image above: “Amateur Wireless Station” — Ha! That’s a perfect nickname for my office.

Sadly, phrases like “Work from home!” and “Be your own boss!” have become synonymous with scams and spam. Well, I have worked from home and been my own boss successfully and legitimately for over a decade now. However, it’s not all sunshine and puppies. So, let’s jump right in with a pros and cons list:

Working from home isn’t really anything new. In fact, it’s really how it all began, that is: commerce. The very origin of people’s names often came from their trade: Smith, Baker, Shoemaker, etc., and their workshops were also their homes.

People can get fixated on the way things are “suppose” to be, as if there were some sort of official rules, when in fact, it’s all made-up. In the beginning, people made up a service and then provided that service, period. For anyone who wants to go into business for themselves, I think this has always been the first step, to resist conformity.

Some might call it “thinking outside the box”, but honestly, I think those who are truly creative don’t “think outside the box”, they have an epiphany one day that there is no “box”, except for those make-believe ones that many people imprison themselves into.

Every generation is smarter than the last, exponentially, that is, while technology also continues to advance. On one hand, that’s great for the global community as a whole, but is very damaging to self-employed people like myself. In 2006, the fact that I could build a website for someone was actually fairly unique. In 2016, the playing field has been leveled. There is so much competition, it gets harder and harder all the time to keep my head above water.

The current climate we live in now is so bad that even if you have a million dollar idea, you’ll find that 10 other people have already done it, and if they haven’t, and you do it, either no one will ever know or care about it, or someone will come along who doesn’t even necessarily do it better than you, but has the money to get more eyes on it.

This article is starting to feel more discouraging than where I was originally going with it, but that’s not true. I think where I’m going at this point is that it’s still very possible to make money from home, but if you’re not prepared to work hard, to push your creative boundaries, endure the downtimes, put up with your friends and family telling you that you can’t do it, you may just want to reconsider going back and looking at what 9-5s are available.

Hey, even I’ve seriously considered going back and getting a “real” job, things have been so rough lately. I won’t pretend that it might not still come to that, but I’ve managed to remain self-employed for the past decade and continue to do so… at least for now. If I do have to “go back into the office”, will I consider myself a failure? Although I don’t consider failure to even be a bad word, no, I won’t view it like that. I’d view the 10-year-run as a success and the getting a job aspect a temporary change in my career. It’ll be disappointing and difficult, don’t get me wrong, but nothing lasts forever, good or bad.

By the way, I should mention that what I just admitted, about having a hard time, I know first-hand that many others in my industry, web designers, marketers, writers, etc., are also in the same boat, but very few will openly admit it. There’s always this unwritten fear that you have to pretend like everything is a-okay or you’ll jinx it. Marketing wise, these people want to pretend like they’re all the best, that they’re not struggling at all, or they won’t get hired. I’ve tried to get insight from others, and even privately, some simply won’t admit that the market has become over-saturated and that they’re affected by it.

I think the ultimate point I’m finally reaching is that if you’re going to do this, you have to have the stamina to keep trying. Not try, fail, and give up, but repeat that over and over… and you’re going to fail a lot. Success is subjective, but whatever you consider success, I think it’s impossible to reach it without failure. Failure is learning, so learn to fail with grace.

Alright, so you’ve made it past my rambling this far and you’ve got the resolve to try (and understand what it means to actually try), let’s move onto some tangible tips:

Important Note: I don’t participate in fanboy behavior. I don’t recommend a specific brand or service because it makes me feel all warm and fuzzy, it’s because I have tried all the popular alternatives and it really is my best recommendation based on my 10+ years of experience. Take it or leave, but I’m not looking for any debates.

We’re just scratching the surface here and there is endlessly more to discuss and further recommendations I could provide, but these are the most important ingredients for your working-from-home starter kit. With these fundamental tips, the whole world has just opened up to you.

When it comes to working remotely, truly, I’ve seen it and done it all, so feel free to ask me anything in the comments below. Ask me to expand on why I’ve recommended certain things or get my recommendations on areas not discussed.