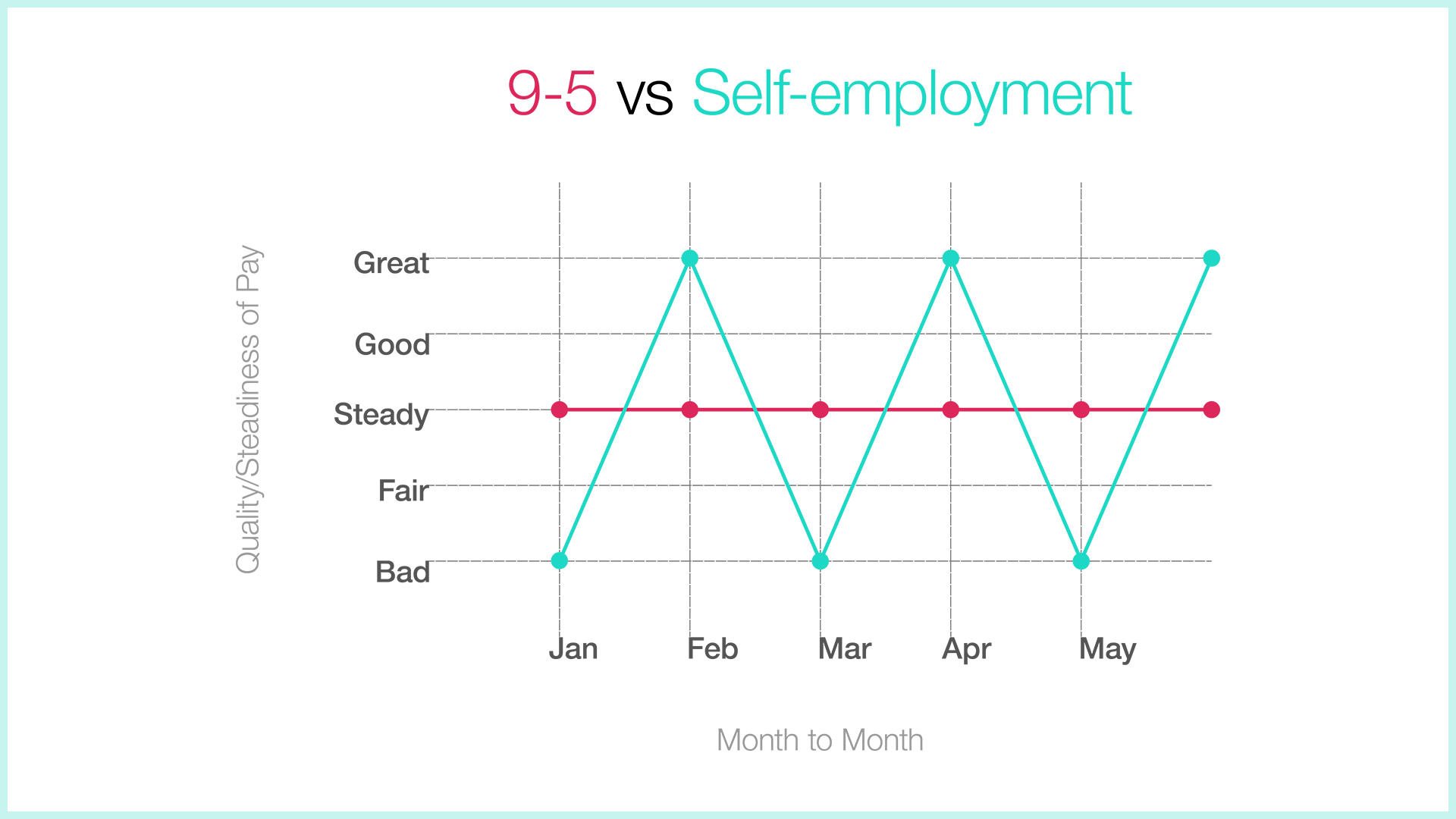 I designed the above graph more as an anecdotal thought experiment as opposed to an accurate analysis based on any sort of available research or data. But, I feel it fairly and accurately makes the point of what I and many other self-employed professionals go through.

Of course, there are certainly outliers on both sides of the spectrum. There are people who try self-employment, crash and burn, and are forced to go back to a 9-5 and then there are others that become wildly successful, possibly even rich. Neither of those scenarios are very typical for the average self-employed.

As they say, the grass isn’t always greener on the other side, which could be applied whether you’re a 9-5er looking to quit your day job, or a freelancer ready to “go back into the office.”

Before going any further, I should clarify what I believe are the distinctions between the two:

I would consider anyone who does not have any creative or controlling impact on the environment in which they work in or their pay to be a 9-5er. This is someone with no managerial power, a cog in the wheel that does a job they’re trained to do by the book (that was written long before they were even born), keep their head down, and collect a paycheck every two weeks.

I use self-employed as a blanket term to cover most professionals, contractors, freelancers, entrepreneurs, and those who own their own business. Someone who has creative control in their work, control in their schedule and pay, or are able to freely move from company to company or client to client of their choosing, providing a product or service.

There’s also a sort of hybrid between the two when for example, a group of self-employed people come together to form a company or team, giving themselves job titles, eventually earning steady paychecks, etc. All the signs of a 9-5 come more into play. However, it still mostly has the freedoms of the self-employed life.

Now, my definition of a 9-5er is a purely objective one without negativity as I find nothing wrong with and also have respect for anyone who can hold down a job, any job, even a minimum wage job regardless of how desirable it is. And on the opposite end, my definition of someone who’s self-employed isn’t necessarily a praise of that choice or a positive. They both have pros and cons, and it’s completely relative. In other words, one person’s pro could be another person’s con.

From my graph, you can see that my personal struggle and loss from the typical 9-5 is that steadiness, steady work and steady pay. However, a greater pain for me in my life that would be lost by leaving the self-employed lifestyle would be the loss of control. And I am an absolute control freak, so I’ve continued to be self-employed for over a decade now, and it has definitely been the roller coaster ride depicted in my graph.

I continue to talk about this issue while most others who are dealing with it, continue to pretend that it doesn’t exist. I feel that a lot of people that took the plunge of quitting their day job don’t like to admit that there’s a struggle, that just that would be like admitting defeat. Also, I get the feeling that there’s this fear that if they talk openly about it, that it’ll hurt their reputation and jinx their ability to get clients.

Well, I’m not afraid to say it. It’s hard, very hard sometimes, and I don’t think that impedes upon my ability to be a quality professional. Yes, I get to work at home, work when I like, usually get paid what I ask without much negotiation, and general work on projects that I enjoy working on. However, those freedoms do not come easy. Think about the different layers and departments of a normal company:

You have no support, no infrastructure, no delegation, no anything, but yourself. You now have to manage all departments and invent and implement all the methodologies, which requires critical thinking, creativity, time, and stress.

Even for a control freak like me, sometimes I wish I could just unburden, just show up on a job site, have someone point at the ground, hand be a shovel, and say “dig.” I wouldn’t have to think; I wouldn’t have to deal with customers; I wouldn’t have to land clients in order to work in the first place. I’d just be able to work and collect a paycheck and not have to worry about any other aspect of the company.

But, therein lies the problem. The people that work the hardest in this world, are usually at the bottom of the pyramid and get paid the least, get paid anything, but a livable wage. So, I turned in my shovel a long time ago, but there’s a balance. Now that you get to relax from physical labor, you now have to allocate that same level of stress to mental labor, but at least now you have a chance of making decent money.

Let’s talk about the money. Yes, the money is obviously better when you decide you’d rather get paid $35/hour than $10/hour and make it happen, but you lose all the guarantees of that steady job. With a normal job, you have security, but you’ve pretty much immediately plateaued. Sure, you might get a raise once a year, maybe a shot at moving up in the company, but that’s likely all capped and there’s no going up forever.

When you’re on your own, the sky is the limit. Of course, that’s easier said than done, especially when you’re first starting out or are competing in an industry like myself (web design), which has become absolutely overrun by competitors the world over.

What goes up, must come down. When it comes to the self-employed, they might have an amazing, “steak dinner every night” month one month, and go straight to a “barely making ends meet, rice-eating” month the very next. But, like most self-employed people, I’m a dreamer and a little crazy. We just keep trying, pushing through the bad months to get to the good ones.

Why Not Just Work for Amazon or Google?

Why compromise? Why not do what you love AND make a great living all the time at a company that pays well? First of all, I’m not flattering myself by even thinking that’s a possibility, that they’d even want me (not being self-deprecating, just honest), but the question comes up enough that I should address it.

Probably the best answer I could give to that is that money isn’t everything. There really are things that are more valuable to me. Time being one of the biggest ones. Of course I’d love to own my own home, travel, eat at fancy restaurants, but I don’t really need those things. I’m pretty simple.

I’d rather rent for the rest of my life, but have complete control of my time, than to have a more lavish life, but be a slave to a soul-sucking corporation. No offense to any company in particular, but even if I wanted to work for one (which I don’t), and even if they wanted me (which they don’t), it would never work. And I don’t just mean in terms of being unhappy and uncomfortable, I just mean that I’d never fit into the “culture” of these kinds of companies. Been there; tried that.

A Word About Success

While success is probably the most subjective thing (even more so than beauty) in our reality, universally, money is pretty much the symbol and measure of someone’s “success.” Most of my friends and family don’t look at my life and see me as successful.

However, the truth is that only the individual can decide whether they are or not. I’m successful. I’ve successfully employed myself from home for over a decade now. And that was the only goal I ever had. Sure, it’s always nice when I’m making more money, but I’ve learned to survive the bad months too because doing what I do makes me happy.

Struggling is never seen as very sexy to other people, but for us entrepreneurs, it’s our bread and butter.

If you’re a 9-5er contemplating taking the leap, please don’t quit your day job and please start small. It should be a transition, not an abrupt change. Start out by creating your own blog, maybe selling ads, looking for odd jobs on craigslist at night, while you still have a steady job in the day. If it gets to the point where you think you really have a shot at making your own income and have at least already started making money on the side, take your shot.